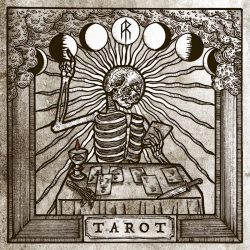 After getting goosebumpy by the original sounding intro of the starting track of Tarot (2017), The Fool, the multitude of Finnish metal influences really caught me off guard! A lot of melodeath, Wintersun’s epic song-writing, combining clean, heroic and very Jari Mäenpää-style raspy vocals. Power metal elements and blastbeating with bright melodic backline are straight out of Wintersun’s repertoire too. Insomnium style very melancholic guitar melodylines pop up ever so often. There’s a huge folk metal backbone that could, logically after two such clear influences, be based on Ensiferum, but just as well to some other influental 2000s folk metal band. Then! All the sudden The Emperor is a pure Kalmah track! Have these guys from North Carolina listened to anything else except Finnish metal!?

And why would the Finnish metal influences be negative?

Lo! They are using these influences with a lot of class, Tarot is a really really solid album. The four above mentioned Finnish bands are huge influence on my metal background so it’s no wonder that I’m keen on placing them on Tarot. Upon further listens it is clear that Tarot is not a copycat but an original album and a great mesh. And fair enough, there’s technical death metal riffing, power metal (Tarot), flashy pure rock solo (The Tower), black metal intro and a flamenco break (The Devil), midi intro (The Sun, the Moon, the Star), melancholic acoustic material (Temperance)… I cannot place the backbone of the album anywhere else than on good old Finnish melodic death metal but it does not make the album any lesser.

On actual negatives and melodies

How many times have I stressed that an album that clocks 73 minutes is TOO … FUCKING … LONG. Sure enough, Strength is a filler track and The Chariot not much of my liking. Notable weaknesses are the very cheesy and unoriginal folk metal melodies in Strength‘s verse and chorus and The Chariot‘s chorus. The American groove metal vibe and attitude lyrics of The Chariot are not to my personal preferences either. However Strength does have a pre-verse that does some good old goosebumps and The Chariot a c-part that grooves like a moose. This package would be tighter without them even though these tracks are ok and especially The Chariot may interest a lot of fans. Better to have more material than too little i guess.

Mostly Aether Realm use their melodic patterns, if not originally, but well enough for me to enjoy them. It is not a melodic symphonic extravaganza like the fellow US band Wilderun, through which I found them. Aether Realm’s melodies are often folk but stellar enough to not slip into joyful major keys. The melodies have been used with good harmony. Symphonic sections and melancholic melodies, keep the folkish melodies fresh. An occasional less melodic riff-storm like The Devil is a very welcome addition.

I am very picky about folk metal melodies, I got tired of Ensiferum’sand Korpiklaani’s hip folk metal in about 2004.

Tarot does have major charm. Especially The Fool, hard-hitting and rhythmic Death (Only For The Weak in the beginning riff, anyone?) and the 19 minute opus, The Sun, the Moon, the Star which has some serious epicness going on. The Sun, the Moon, the Star is really hard to dissect into bits but it flows smoothly as hell from choir hits to electronic sounds, symphonic melodeath riffing with folk cleans to power metal riffing followed by straight to your face melodic guitar frenzy and black metallish blastbeating. Then a piano interlude! And this was just a 3 minute part in the middle of it!

Even the drinking song King of Cups does not fall into an unoriginal drinking song pothole but is genuinely a good track with mean vocal delivery, some killer fucking guitar work and lovely weird ass solo.