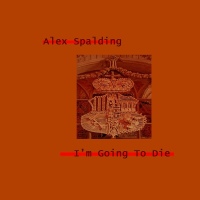 Listening Alex Spalding’s newest effort I’m Going to Die based on his previous solo album Amos in Flames, may come as shock. The gentle electronics of Amos in Flames are gone and as a replacement, we have vast, heavy industrial. The sound doesn’t have a pinch of humanism in it. It is more reminiscent of deteriorated buildings rising from a deserted Soviet town. Harsh electro assault with some noise elements, dark beats, lots of dynamics and occasional melodies. I dig!

The beginning of the album is such a middle finger, Driver is a suitable intro with its harsh electronics but second track I’m Going To Die seems to be the real driver there, as it for sure will drive a lot of listeners away. The third track Re-program is what really starts the album. Judging by the trackname even the artist seems to be aware of that. In the half-way of the song the harsh beat and beeping suddenly halt to an ingenious noise-assault break which leads to an evil groove straight from the top. If you turn death metal riffs into electronic beats, this is what it could sound like.

Another notable track follows soon. Ugly with its more multidimensional evil groove. My favourite of the album. Very Alex Spalding-like a few very short, ok fillups Ender and Samäel balance the way to Bizzy In The Mix. An almost 6 minute track. It holds its ground remarkably well, shifting enough to stay interesting. Surprisingly enticing, or like my girlfriend blurted while wandering in the room: “sounds like robots having sex”. The strong middle album is completed with Gridlock, its most notable feature; a brilliant groovebassline!

After Gridlock the quality doesn’t go down notably, perhaps it is surroundings which become familiar as most of the rest float through without boring and without boring itself in memory. Except, goodness on the 10th track, Robotics, and the centerpiece of the album (more like fuck-you-piece) I’m Going To Die (Full Version). Not bad for a 23 MINUTE NOISE TRACK, but I cannot see how a 23 MINUTE NOISE TRACK wouldn’t be skipped when I’m enjoying my industrial.

The sound, and the beats are enjoyable, but the problem is, it continues all album long. The album would love a bit more variation, like the organic bass line of Gridlock, or eardrum busting à la Re-Program. Not surprisingly the best tracks come from the beginning.

If you are into dancing in factory halls with your gasmask on, while stabbing cybergoths in the face; this is your stuff. Or if you’d like to hear how close to Metal electronic music can be, try it out. The industrial metallish tinge brings in mind the degradiation of Eastern block at its worst. Decline is beautiful. I heard in Ukraine there is a festival in an old Nuclear power plant. Maybe someone should book Alex Spalding?

A Free download album as always: http://archive.org/details/SPNet076-AlexSpalding-ImGoingToDie (only 56 downloads are you kidding me?)

Beatwork seems to be just emerging, a fitting sound for an intro. Thematically brings in mind Kanellos’ In A Breath (http://archive.org/details/Siro584Kanellos-DestroyMusic; to be reviewed soon). Like the beat is behind something taking the top out of it.

Short enough to listen, still skipping it half of the time but it also provides a giggle now and then.

First it is catchy, then it busts your eardrums with noise, you may feel angriness rising up, but it is very shortly turned into aggressive euphoria as the next beat is even catchier. The beat switch with a noise-assault break in between is ingenious.

A good progress to a beat and a melody, but simply worse than Re-Program and Ugly.

Multidimensional evil groove explodes near one minute marker to a 3D headphone experience.

A Random idea thrown in the midst.

Bores in the beginning but then a groove bass bores itself in. Through all industrial layers it sounds absolutely wonderful to hear some organic-like instruments.

Very odd, Alex Spalding’s fetish for noise is apparent on this one. Lots of heavy steelwork.

A robotic noisevoice seems to repeat my first name!?! Possibly for this, Robotics takes its place on the top of the album.

Very beat oriented. Beat as a main drive and melody. I feel the beat is a bit alone, it might fancy a helping hand. Still works and surprises await.

The centerpiece of the album. 23 minutes of noise, more like fuck-you-piece. I sat through it once, was entertained, annoyed and laughed. Good times. Never again. Funnily in this noise track there is a catch! A repeating “chorus” sort of! Voice repeating “I’m going tooo diiiiieee” at probably 50 times during the length of the track. I find myself trying to sing along with it but the voice cuts of abruptly half the time. Works well listened a few minutes at a time randomly.

Ambience, steel girder tamping while grand factorylines mechanically move on… Over 5 minutes but I never have any hurry in skipping it. On the other hand I can never recall what happened in it either.