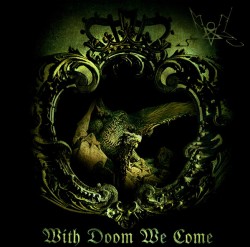 Summoning has drawn Lord of the Rings influences since the early 90s and does it without resorting to annoying cliches. Sure, the music is pompous, repetitive and doomy but in the right way. If one didn’t happen to know their themes come from Lord of the Rings, it couldn’t be guessed.

As they’ve been really deep in the mythos for a long time, there’s no artificial Merri and Pippin or Aragorn bullshit. But there is a feeling of vastness, glorious mountains and adventure. The slight casionism’s in keyboard sounds can propel some people away but to my delicate casio-ear it is not bad. I guess it helps that the compositions are really strong, unique and epic metal tracks. Monumental, one could say.

Tar-Calion draws middle-eastern influence, showing that they should continue to experiment with melodies. Carcharoth‘s main riff is pretty much the riff of the year. Night Fell Behind sports an extremely atmospheric piano melody with a great riff in a composition that keeps developing and adding new melodic layers. All of these three are in my top 2018 tracks. Silvertine and With Doom I Come are both also really easy to label as very good. That doesn’t leave much to not like in the album. One of the best albums of the year for sure.

The Vanished Pantheon was released in 2005 by a Finnish label Firedoom music. Even though it was definitely one of the best releases of 2005, it was perhaps too odd and distant for most Finns to understand. It stands as only the 3rd release of the Brazilian Mythological Cold Towers, found in 1994. Their first two releases were received with quite indifferent reviews. The first, Sphere of Nebaddon got more positive publicity, but for me the second, Remoti Meridiani Hymni is stronger of the two. However neither of the first two albums become even close to the 3rd release.

It seems Mythological Cold Towers really found themselves on The Vanished Pantheon. Massive doom metal accompanied with a feel of mythic remote civilizations, and old cultures getting grinded to the dust.

The gigantic atmosphere sometimes slips to being humorously overdramatic. But if you have a personality that can appreciate extremely dramatic compositions (à la Bal-Sagoth) you should find this a very interesting release. Quite raw and unpolished, yet very natural sounds fit Vanished Pantheon perfectly and give a lot of primeval power to the compositions. The sounds remind me of Keep Of Kalessin’s Kolossus, but unlike KOK, Mythological Cold Towers succeeds in having lots of strength and rage within a natural sound. Mythological Cold Towers already released their 4th album Immemorial in October on the German label Cyclone Empire. I sincerely hope that The Vanished Pantheon wasn’t just a one album miracle.