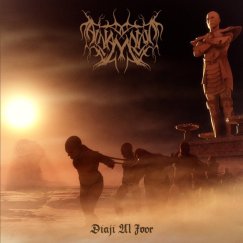 Too many bands from the more exotic metal countries try to sound like their western counterparts. While it is interesting to find a band from Saudi Arabia that sounds like it could be a mediocre German thrash metal band, it doesn’t add much to the experience besides novelty value. Luckily AlNamrood is not one of those bands.

AlNamrood is usually titled a black metal band, but they are far from the traditional sort. In fact, often it feels like the tracks are based purely on Arabic elements with distortion guitar and metal elements added on top. It is really refreshing not being able to know who to compare them to or even what genre they are. They could even be described as constantly overpeaked heavy metal band with basis on Arabic instrumentation.

The beginning of the record got my hopes up immediately as I’m a sucker for all things unexpected in my metal. The raw Egyptian-like intro Dhaleen, turns into stylishly minimalistic tremolo instrumentation with wind instruments and “aaaaaa”-chanting.

All the more the surprise when the vocalist Humbaba stats barking away with his monotone and quite unique vocal style in the second track Zamjara Alat. At 2.05 Al-Namrood tunes in a better melody I’d ever expect this obscure band to be able to deliver. It’s a c-part after the first verse straight from the boiling desert, accompanied by beautiful backgrounds. Already during the second track it is clear that this is not a normal metal experience but a lot more thrilling one.

The drumming first felt like a bit flat drum machine but because it is nicely overpeaked it invokes more raw power than in most cases. The sound really grew on me and on further listens the unpolished sounds stopped bothering.

On first listens it was also easy to disregard some unharmonic passages as amateuristic. Like Hawas Wa Thuar which is an particularly odd piece, with melodies that seem out of tune. Only later it started to feel like this atonalism (?) must come from Arabic music heritage. AlNamrood uses melodies that are straight out of European scales. Especially the said Hawas Wa Thuar succeeds in invoking a real diabolical feel with tastily unharmonic melodic patterns. Where as Hayat Al Khezea is a ritualistic piece where the monotonic vocals heighten the atmosphere and the majestic and eerie end speech sounds to discurse some serious, sacred or esoteric issues with conviction.

Actually I cannot think much that I dislike. If I have to start picking, the melodic folk metal influences, the backbone of most of Ejhaph, is not much of my liking. Ya Le Taasatekum is a bit mediocre but on the other hand conceives of a more rapid pace than its counterparts. It also really excels in varied and intense vocals and an outro with rumbling drums, very much a counterpart to the cover image. It’s not really mediocre after all, I gotta take that back. And even Ejhaph has mightily interesting percussions and eerie guitars in its last two minutes.

All in all, all tracks have something unique to offer, every track differentiates from the crowd. Like massive Adghan with double bass landslides and bright acoustic instrumentation or Ana Al Tughian’s mystic woodwinds and rhythmics.

Diaji Al Joor is a grower, after putting it aside for a while the true excess of unique elements and exceptional atmosphere kept growing. It took about 3 months to process into 9 /10 level.