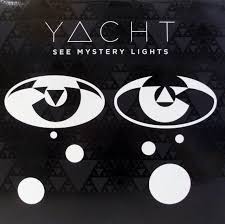 The album in question is Yacht, a duo from Portland, Oregon and their 3rd full length See Mystery Lights released in 2009. I bought it cause it was cheap, but also the artwork was nicely minimalistic. Only later noted that it actually reflects light when looking at a right angle forming bigger and smaller triangles! Extremely cool.

I really had some hopes of this album after digesting the cover arts. Yacht also has a huge amount of listens in Last.fm (3,5 Million) and all of the tracks of the album in question have over 50 listens last week. But Yacht’s See Mystery Lights is a mostly an annoying release. First time I lasted only 2 songs before the reek of trendy indie hipsters became overwhelming. Some 5 more times I urged myself to last the whole album because at least, it is varied and experimental enough to keep me well awake at work.

Album kicks off with a fine build up and a cool odd guitar melody, but unfortunately it proves to be the best melody of the album. The first song Ring the Bell does transform and could go to places but semi-annoying vocals and a stupid chorus keep it on the ground. I hope you go to hell.
Next track The Afterlife introduces the female vocals. I do not digest them; at all. In fact the vocals ruin the ok sounding backgrounds. The singer sounds like a cheap bootleg version of Finnish-American singer Vuk; but fails.

The third track I’m in love with a ripper puts in a steady and cool beat, effing up the second most promising track start. Only to become fucking annoying at 18 second mark with the terrible shout background effect. While I approve experimentations with vocal samples more than anyone, this is just not a beat/sample combo that anyone should put on repeat. Sounds like humour music but its not funny. It sounds very juvenile. But hey, the kids may dig it…

The album does have more cool ideas and odd breaks, but even more ideas that have a reek of indie hipster pseudo-intelligent oddness in them. Also very annoying vocal melodies and god-idiotic lyrics. For example Psychic City which does not really seem to go anywhere. It is really a shame cause the lyrics sound interesting for a few verses. Then it goes idiotic. Have you ever heard a humming melody “aai-aai-ai-aa” so without emotion and colour? No I am wrong it has colour. It is SHIT-BROWN, one of the most annoying vocal melodies I’ve ever heard.

I’ve spotted multiple comments of this being a “fun” release. What exactly is the fun of this. Tracks are not dancable, their lyrics are at best average, and usually sub-par + cheesy. The funnest song is probably Summer Song which cannot have been made seriously. The track has a sense of irony in it, as it is probably the darkest track on the release. The lyrics urge: “move your feet to the summer song” and it is absolutely not-danceable. The band makes sure of it by dullifying the rhythm when it seems to become danceable. I’m not sure if its intentional but it is pretty funny.

The only decent showing of the female vocals come in the minimalistic and short version of Psychic City, where she sounds actually good in a noir-bluesy way. Probably cause in this track she is actually forced to sing in her own voice and not trying to sound cool amidst compositions that should not exist.

Third of the three tracks that don’t make me want to tear out my hair is the combo track It’s Boring/You Can Live Anywhere You Want. And it really is repetitive and quite boring, but it at least has a post punk vibe and decent vocals. It might be a homage to old Killing joke, which usually is pretty damn boring. But a lot better than Yacht, thank god.

The sounds are actually solid and lots of random odd and stupid ideas are thrown into songs. You can hear that a lot of creative effort has been put on See Mystery Lights. But overall; I really don’t get the point. If I wanted to dance, this record would make me sit down. If I want to listen music I prefer not to get fucking annoyed by it. To summarize i’ll quote Yacht’s song We Have All We’ve Ever Wanted:
“I don’t know so I ignore you”.

“Protect yourself from digital decay”.