Sea of Poppies is best described as experimental harsh noise. The submission notes of the first album of Sea of Poppies explained that the artist had a hard time with health that led to experiments with some analogue stuff to let out some steam. A form of catharsis. The analogue experiments also make the release sounds oldschoolish, pleasantly non-digital.

Usually when a first-timer makes an experimental album, painting or a poem to help with the healing process it’s value is merely for the healing itself. It can be very effective as a sort of therapy but when a 50 year old truck driver picks up the brush first time since being in primary school and makes a cubist painting to battle his depression, the results are often a bit funny. But since it’s therapy you aren’t even allowed to laugh at it! Sad but true. I’ve found so many “I did this to recover from a problem x”-releases that are very unlikely to interest anyone in multiple art forms it’s not even funny. But hey, whatever works for ones recovery right. Luckily Sea of Poppies seems to have ambition beyond the healing process!

Even though the artist explained himself to be a new noise artist, his bandcamp lists Sea of Poppies as a sister project to Deprivation Chamber that released an ep in 2010. Maybe that explains the well-formed sound.

When the first track kicks in, I start to quickly yearn for tempo switches though. The constant jarring tempo may be cathartic to most harsh noise lovers, but I tend to find it tiresome. Luckily second track has a pleasant watery background that breaks the tempo artificially. A high whistling sound does get a tad annoying but it has a bit of build up during the process of the track. 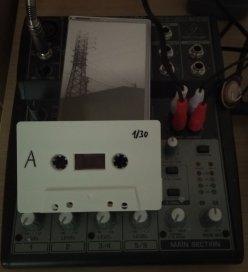 Third track is the highlight of the release, clearly the most varied piece. The standard tempo has altercations that break it and at 1.30 the main theme is also changed completely. All this flows together and sounds natural, very nice! The next theme builds up and has more changes, but it takes till 8 minute before shit all the sudden gets really loose with analogue jerks. Few times one can even nod your head to rhythmic changes. Does 9.20 have a modulation hook? A modulation hook in noise? Hah!

All three tracks are named “untitled” so I took the liberty of renaming them stupidly to differentiate them for each other (and for the lols):

In the submission text the artist also explained that he used different methods to make each track to have an own personality but also to learn something new. Gladly it is apparent; all three different tracks have a different identity and sound. I find the last track alone interesting enough to be eager to listen this release from time to time after this review is done. Good stuff!

Free download in bandcamp: https://seaofpoppies.bandcamp.com/album/sea-of-poppies (you can also buy the release as a cassette for a very affordable price).