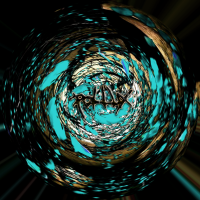 It took a while to find another Pollux album I really like after the brilliant Offer Their Souls a few years ago. No, I haven’t tried them all, there are if not hundreds then dozens in between). Even though Pollux is a very productive artist, he still keeps a fine quality in his works. But the ones I’ve tried, mainly Abandoned Area, Lune Rouge and Wasteland have left me just quite pleasant aftertastes.

My Beautiful Melancholia which somehow has an enticing name, however leaves a very good impression. The varying beats give a lot of new grounds to the ambient of Pollux and make for a new interestspan. First track Absence (Blasted Version) even makes repeated hipsteresque background woman vocals work; without reminding of wool sweaters, MacBooks and instragram-jokes too much.

It is followed by Rain In Your Face & Stress In Your Mind (Loosening Version), which is rather a positive chillout vibe with nothing much happening except variation and growth circling around the same set of melodies. UAV Style (Plasma Version) continues the same but for me has a more complex variation. Not a huge amount of goosebumps but stellar progress and mild surprises.

The real catch is the title track. Similar than Pollux’s track “Black Hope”, it is has a very Braid’ish melody; I can see the town in flames in the main screen in my soul’s eye. The effect is very pretty. Pollux really works best when associated with a certain mental image. My Beautiful Melancholia even has a sort of evil twist in it, but it entwined between the beautiful parts that it doesn’t bother like some evil horror ambient might bother. It just adds more to it.

One advice for even more enjoyable experience is to take any track from the all stellar Lune Rouge (lately i’ve preferred Espoir de Verre) and the intro of Wasteland “Fallout New Vegas – Goodsprings Wasteland, Day (Remix)” as the first and second track. Then you have an album that does last a bit longer and provides even a wider variety of welcome ambience. The darkness of Lune Rouge is brilliantly overtaken by pleasant ambient, beats and then My Beautiful Melancholia. As an outro the tense Corruption Eternelle is often my choice. It brings a nice, star-light eclipse wandering along the shining dust clouds in circles -effect to finish up the album, if you know what I mean.

Dark Ambient with a sense of melody

However clicheicly titled, this free to download ambient release is a real jewel in the weblabel rough. It was released in 2010 by TRASHFUCK Records and Kitty on Fire Records as a webrelease and a cd-r. When an album is co-released by two such brilliantly named weblabels it cannot be all bad! In fact, it turned out to be one of the best Dark Ambient records’ I’ve listened and one of the ones that really got me in the genre, along with NOTHING (best known as a side project of JWW from Agalloch).

All the songs are freely listenable and downloadable from last.fm which is linked to the title of the track when first mentioned. For whole packet, scroll to the bottom of the review.

Master Toad starts the split with 4 tracks, and 3 are instant hits. The vaguely hearable I Stood Upon The Beach of Lost Souls has a scary atmosphere and an unexplainable dark tower vibe, somehow still manages to stay interesting. If I was you I wouldn’t tune up the volume, as Dark Insects of the Catacomb whirrs right in with a dark egyptian atmosphere about 20DB louder. Extremely solid and gloomy, and fitting to the title! Curiously, the track delivers an atmosphere alike Mythological Cold Towers’ release The Vanished Pantheon. A massive doom record that has been on my regular playlist again lately. Similar atmosphere continues with Frail Raft Through The Rivers of Hell and if possible, it fits its title even better. A grim journey, but stays pleasant by growing up to a wonderful guitar melody in the end.

Unicorn Dreams finishes up the first half with a lighter tone and a beautiful melancholic melody.

What stands out in Master Toad’s side is that is so organic. As nighttime music goes, it is hard to top tunes that combine an interesting Ambient wall with a tangible story and as a cherry on the cake, a guitar melody.

Pollux’s side is less organic, but it still delivers great melodies. Black Hope has a big Braid -vibe. As Braid happens to be one of the best indie games of all time, this is very pleasant, though again, quite unexplained. Blue Hope is, if possible, the best track on this album with a light piano and very pleasant pulsing soundwave. The album finishes up Ghosts (Eternal Version), which is an interesting dark ambient wall, with a similar scary vibe than I Stood Upon The Beach of Lost Souls, concluding this album in fitting manner.

In free download weblabel releases, you rarely hear such well crafted passion and skill packed in a compact packet without any fillers.