My face when I was listening to a random rather praised American metal band that turns out sounding a lot like a mixture of Wintersun, Insomnium, Ensiferum and Kalmah. And they do this Finnish melodeath thing supremely fucking well. Every other year I lose my hope on ever finding really good melodeath anymore, then I am proven wrong…

The Fool is probably their most original and best track, but by no means the only great track in the album. Full review of the album has also been released in Like Music To Your Ears.

If you don’t like bright complex electronic music, you might still dig this crazy Irish guy. Must be a love it or hate it artist. As a very raw definition one could say Iglooghost combines IDM, trip-hop / wonky, breakcore, dubstep and bright and fucked up vocal sounds. It has also been called a maximalist album which fits really well as there’s a shit ton of stuff happening.

Once more I didn’t know music like this could exist and be so goddamn logical and mind-boggling at the same time.

I am almost ashmed on how much I dig Neo Wax Bloom, the album does not wear out with tens of listens. Bug Thief is the best electronic track of 2017, hands down. The background story is also worth a mention: “It’s a story about a void named “Mamu” and its destruction by two falling eyeballs. “… OK OK.

Finnish sludgepulverizing. Very hypnotic, mostly based on gigantic riffs, but Radien also flourishes in good spareful use of melodies. Even if you don’t speak Finnish, this is a supreme release. Also free to download from bandcamp!

I am not as taken aback with Leather Teeth, as I’d like to. I expected it to be a full time heavy as shit electronic retrowave joyblast like Trilogy but… It is good but the ridiculously strong melodic themes are not as apparent as on Trilogy. On some tracks like the title track everything sticks together like it should. Bringing in two great vocalists in Ulver’s Kristoffer Rygg and Beastmilk/Grave Pleasures Mat McNerney also helps the case. 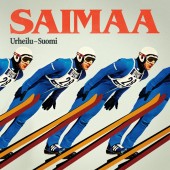 Finnish progressive poprock with full-on sports theme. A lot of 70s/80s resembling instrumental material infused with nostalgic clips from the past, and spoken word sections that somehow remind of electronic occult band Tähtiportti. The totality sums as a really competitive album. It is really not just a classic rock album, but nearly a big-band album too. There’s an array of wind and bowed string instruments and synths. I don’t think a mixture like this has ever been made.

There’s a lot of humour like the over of the top hero story Kuningas (footballer Jari Litmanen). 99 % of the album is really far from normal depressive Aki Kaurismäki like Finnish music tones. Yet out of the blue Saimaa crafts a supremely touching track in Suo Porkka ja Suksi. It tells the tragic story of cross-country skier Mika Myllylä like a Kalevala poem. If you want just instrumental goodness, I recommend the crazy bass leads of Pikataipale.

Even the first part of the double album is too long (77 minutes), hence I made a better 41 minute version of it to a Spotify playlist under this paragraph. You are welcome Saimaa, next time maybe hire me ;)?