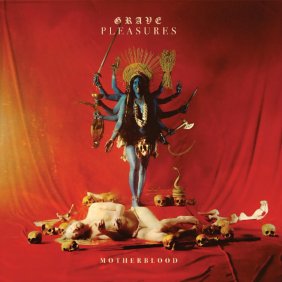 Yes! Everything that Beastmilk, who later renamed themselves to Grave Pleasures did right in the first album Climax (2013) also comes in place on Motherblood. In the get-go Climax dangled on the edge of annoyingness and hipsterness but regained its balance with a 2.5 twisting somersault. The second album Dreamcrash (2015) had the same setting but dived belly first in the short end of the pool.

It only took about 5 seconds of the first track Infatuation Overkill to get the first goosebumps. First minute confirmed the track better than anything on the previous release. It is not a void promise, the album keeps a strong base level throughout. The blasphemous lyrics, deathrock and catchy pop hooks dance together elegantly again.

Joy Through Death would work great as an eulogy, or is it just a piece of dark humorous obscenity? The way Grave Pleasures tackles them both at the same time is par none. Doomsday Rainbows is one of the many brilliant titles in their repertoire. Middle-paced track blasts off with the c-part. “and when i’m high on the mushroom cloud”…

The three tracks after Joy Through Death are a tad more average than the rest but the ending trinity is all style. Atomic Christ‘s repetitive and hypnotic rhythm reminds a bit of space rock and post-punk greats (“Whaaat is that David Tibet!?!” *Quick google*, “It is him!!” (Current 93 / neofolk legend)). Deadenders is a pure rock track with radio potential. It also works really well as an acoustic version! Haunted Afterlife is a gloomy lyric, with lovely resounding post punk sounds. It is only three minutes long and for once Grave Pleasures does not seem to take any pleasure from death. But the greatly sung melodic sorrowful chorus is such a pleasure to listen to.