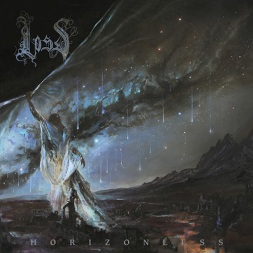 The second album of Loss, Horizonless is more melancholic and melodic than most funeral doom / death-doom bands from the US. Horizonless has gotten plenty of fine response and is destined to become Loss’s breakthrough from the funeral doom underground.

The soothing melody lines of All Grows on Tears switch fluently between sorrowful and life affirming, reminding of very melodic death-doom bands like Swallow The Sun. At times Loss broods on dark riffs and the melodies are more nihilistic serving in a supporting role. Loss doesn’t go as far as all encompassing heaviness of Evoken although the first halves of Banishment and the title track Horizonless seem to seep from same sources.

There are plenty of small sections that are not from a playbook of a layman doom band. For example the acoustic guitars in the beginning of When Death Is All, or the little jazzy bass lines that at times heighten into leads riding over the dark wave of The Joy of All Who Sorrow. I have come to know – THE JOY OF ALL WHO SORROW! Then… How about the last 20 seconds that goes black metal? It’d actually be a really fucking good ending track. Too bad Loss didn’t ask me before they released the album ;).

I first thought the album to be a stellar but not superb that has an incredibly strong starter in The Joy of All Who Sorrow. After such a great track the rest of the album feels a tad stale. Also let’s face it, When Death is All is not the epic closer a masterclass album should have. It does have a pretty outro and good elements but as an entity it sounds a bit pieced together. The rest of the 5 main tracks that clock around 10 minutes are more fluent.

The album was on hiatus from my playlist for a few months after which I decided to move The Joy of All Who Sorrow as a last track and LO! Imminent new charm skyrocketed Horizonless among the best releases of 2017. I.O. serves as a fine intro but Moved Beyond Murder‘s 2.44 of ambient humming I removed altogether. Besides these 2 there are also two other semi-intermission tracks that serve well in their place. Almost 15 minutes of intermissions is still too much. (See the bottom of the post to listen the Like Music To Your Ears version of the album).

Naught deserves a couple of special mentions. The beginning clean guitars twinkle like the stars in the cover of the album and its last 3 minutes have the most chilling and indulging vocal lines. The vocalist Mike Meacham sounds to be committing an auditory seppuku with output of pure suffering and contempt. His usual vocal style is almost comically low growling, but the moments when he ranges to high screams and clean vocals are all highlights.

I dare to say this is my favourite doom release from the US since Morgion’s criminally underknown Cloaked by Ages, Crowned in Earth (2004).

Bandcamp: https://loss.bandcamp.com/album/horizonless
A good interview about the themes of the album: http://newnoisemagazine.com/loss-self-reliance-exceeding-horizons/

Fixed track order to maximize The Joy of All Who Sorrow: