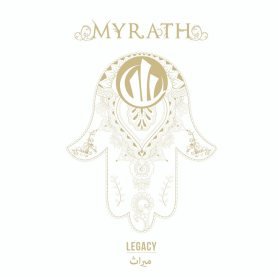 Myrath is likely the biggest metal band yet to come from Africa. In their 10 years of activity they have released 4 albums of solid standard.

Myrath play melodic progressive metal but during the years they’ve calmed down on the metal and progressive and added more symphonic, almost bombastic elements. The latest album Legacy does not emphasize heaviness and the progressive elements are interwoven in the tracks. There’s no Dream Theater like instrument extremities that were present on their earlier years. It is still very much a metal album, even though the lightweight video track Believer might fool the unwary.

The musicianship and songwriting is top notch. The more crooked and catchy bits like the sudden rhythmics of Nobody’s Lives or the stadium chorus of Get Your Freedom Back are natural parts in the body of the tracks. Nobody’s Lives also includes one of the most notable choruses of the album where English is for a moment replaced with Arabic. The c-part of the said track has a mighty rhythmic groove and at the same time to untrained European ears sounds like a prayer call from a minaret!

The most thrilling component of Myrath are the North African/Tunisian folk influences they augment. Singer Zaher Zorgati deserves a very special mention of his extremely pleasant voice and how he floats his voice in true Arabic fashion. I’ve never heard that being used in metal before and it sounds fantastic. Surprisingly Myrath also adds a few bits of electronic backgrounds here and there.

After the first 3 full tracks of near bliss the quality goes down, I noticed myself humming and sing-alonging way less to melodies and choruses of the latter part of the album. The Needle is a track that for the most part could have been made by any Western band and that is probably why it is less interesting. Duat and Endure the Silence also do not have as strong a melody and choruswork as the rest of the album. Through Your Eyes is a good track with mildly too sweet chorus (although it must be pointed out that it fits the lyrical theme) and Storm of Lies is a good track overall but just more of the same, failing to be the epic closer I was hoping for. Luckily The Unburnt and especially I Want to Die, with its touching lyrics, bring some top notch quality for the latter part of the album too.

The Unburnt’s lyrics surprise by showcasing the story of Daenerys Targaryen of A Song of Ice and Fire (or Game of Thrones if you prefer the watered down albeit still good tv-version). It encompasses such ethnic elements so naturally that in my mind it has already intertwined as a part of Daenerys’s character.

Myrath’s strength and weakness lay in the same area, accessibility. For a progressive metal album it’s song structures are too similar to each other to hold interest on top of the scale. However it is really hard to point out many wrongs in what they do. Picking up a single track from the last part of the album yields almost no faults. For someone who is looking for really challenging progressive music, Legacy is probably not ideal, but it has accessibility to spare for more lighthearted music fans who are not afraid of some surprising twists.