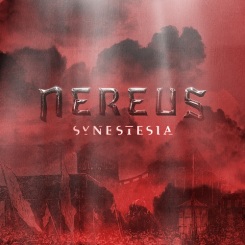 Synestesia is a Finnish melodic death metal band that was formed in 2001 and has been a long time coming but failed to break in to the surface. The predecessor of Nereus, Feenix was very well acclaimed critically, but it seems the band still stayed under. Alike Feenix, Nereus is a self-published free download album (that was also released in a small batch of cds). Immediately after tuning in, Nereus captivates with the amount of professionality. It is apparent that the band really know what they doing and have created an impressive and professional sounds for the record.

The first track Alku begins with a foghorn humming and the sounds of seagulls. Atmospheric ambient, then a piano melody. A great clicheic intro track with a notable melody. But just right. The next track Juurelle majakan did take multiple listens to open up. On first it passed me by nearly completely. Later it elevated as among my favourite tracks of the album. A very catchy chorus with a wonderfully epic background choir, melodic riff. I could imagine hearing this from the radio? Vocals are extremely raspy and the first glimpse of the rather wide growling range the vocalist has. I really dig that the lyrics can usually be imposed from the vocals without the need of reading them.

The next track Valo is a solid track with nice melodic riffing and raspy vocal goodness, but is a step down from Juurelle Majakan. It starts a quick downfall that continues with the title track Nereus and peaks in the 5th track “Murha?”. Murha? is probably the most experimental track of the record with a chugging riff and spoken vocals posing as an official announcement. The structure is interesting, but not captivating; the lyrics also bother me as they are not too interesting and quite clumsy.

The next track 274 askelmaa covers the downfall well. The lyrics are obscure as hell, I do not know what are these 274 steps and how they relate to anything but the song has a big emotion and atmosphere going on. Death/doom composition with an emotional quality and progressive touches makes this a clear highlight along with Juurelle Majakan. Also I do not know how Synestesia manages to pull it off but the emotional death/doom track finishes up with a memorable 70s progressive rock keyboard jam!

The album finds another low point with Hiljaisuus, which might actually work better for a listener not native Finnish as the lyrics are clicheic as fuck. The composition really has potential but repeating “niin kaunis on hiljaisuus” on and on again just takes the mat under this song.

Rest of the album isn’t that memorable in a good way or bad but solid 7/10 death metal with its minor peaks and low-points. Peaks include for example the raspy vocal performance of the vocalist, groovy riff of Kone pysähtyy and the end of Kuolleiden Kulkue which has another doom/death riff topped by piano and finally epic female vocals. It serves as a great outro for the album. It also brings in the question, what if Synestesia really made just Doom influenced metal in this style that they so well incorporate in small sections?

I believe the record may actually work better if you don’t get the lyrics as for me they aren’t that special and that is the biggest problem of the album. When listening in your native language; lyrics usually have to impress, but in Nereus they are rather obscure. It is supposed to be a concept album but even with reading the lyrics once, checking their internet site with some great thematic art (http://nereusprojekti.net/), and trying to think of the concept, it remains obscure. Maybe Valo and Nereus are some sort of propaganda tracks of the Nereus nation? Meaning the emotions are clicheic on purpose?

As a whole Nereus fails to captivate this picky listener, who nowadays mostly finds melodic death metal rather bland. There is no questioning however that Nereus has lots of diverse elements and originality and it does keep the listener entertained, especially on first listens.

For a listener who is really into melodic death metal or for the “Finnish Sakara-generation” this album can be a very good experience, but I doubt Synestesia reaches the front-line of Finnish metal bands with this effort. It is melodic, raspy, heavy, diverse but in total hard to grasp and lacking much of the high points. But it is a good try, keeping this quality Synestesia would surely had continued to grow and slowly find bigger audiences. Unfortunately in the December 2012 the band announced its breakup. It is a shame as this sort of hard-hitting metal would surely strike home way better in a smoky club after a few beers.